Wolverine Sign Works was founded by Ralph Vosburg and J. Gratz Cook in 1916. Family history relates that the two traveling salesmen were both staying at a hotel in Sandusky, Michigan that year. Apparently, they struck up a conversation and discovered that both of them lived in Owosso. Mr. Vosburg was selling signs: baked enamel advertising signs made in a factory out east and shipped to his customers, who were then supposed to erect the signs in a local farmer's field along the roadside to advertise their business. He remarked to Mr. Cook that when he came back in a year or two to call on his past customers, he often found them dissatisfied. Many had never gotten any further than un-crating the signs in the back room, where they still remained. Those signs that had been erected were often obscured by brush, or lay on the ground where the weather or cows had knocked them down.

Vosburg told Cook that what they ought to do was start a sign rental company. They could rent signs to businesses like those he was selling to and then continue to maintain the signs in good condition: cut the brush, repaint them on a regular basis, so as to give the customer a good value.

Vosburg and Cook borrowed against their life insurance for the capital to start their business, and since Michigan was the Wolverine State, they called their company Wolverine Sign Works. They located their business in Owosso, where it has remained ever since, and since 1920 it has occupied the same, now over 100-year-old structure. 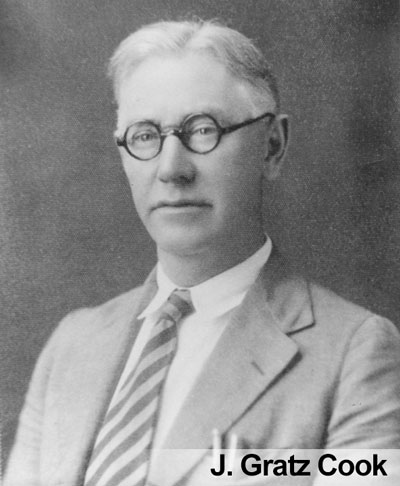 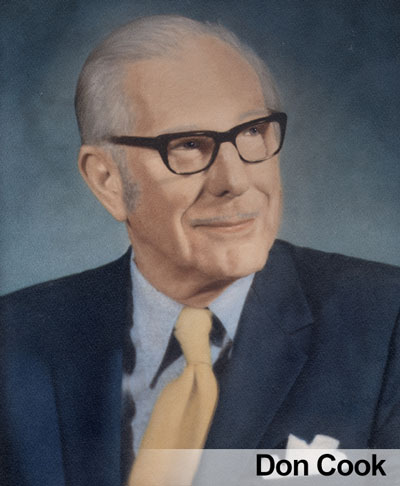 Within two years, Gratz Cook sold his interest in the company to Vosburg and went on to selling some other product. However, in 1924 Ralph Vosburg's business had grown and he was looking to hire a salesman. He knew that his former partner's son, Donald Cook, had just graduated from the University of Michigan, and that Don had already demonstrated exceptional sales ability as a Fuller Brush salesman during his summers off from college. He had been the third best-selling Fuller Brush man in the country the summer before, and Fuller was offering him a full-time sales position. Vosburg met young Cook's request for a salary of one hundred dollars per week, which was more than Vosburg was taking home himself from his still-small sign business. So in October 1924 Donald Cook started work at Wolverine Sign, and also got married. Both the marriage and the employment would last over sixty years.

One of the first accounts that young Donald Cook called on was Auto-Owners Insurance, then, as now, Wolverine Sign Works' largest customer. Vern Moulton, the founder of Auto-Owners, wrote Vosburg after that first contact that he thought that the new salesman would "work out." Moulton and Cook became lifelong friends, securing the business relationship that had begun before either company was two years old, and continues today.

Ralph Vosburg soon began selling stock in the company to Don Cook. In 1926, Ralph suffered an untimely death, and his son Leon quit college to fill his place at Wolverine Sign. Eventually, Leon Vosburg and Donald Cook each owned half of Wolverine. In the early 1960's, Cook bought out Vosburgh and became the sole owner of Wolverine Sign Works.

Don's outstanding sales ability had served the company well over the years, and the company had a large number of sign structures filled with ads for the leading insurance companies in Michigan and Indiana, many local banks and retail stores, and some of the leading tourist attractions in the state. These included The Grand Hotel on Mackinac Island, The Perry Hotel in Petoskey and Bronner's Christmas Wonderland in Frankenmuth.

Millions of impressions throughout the midwest every day!
Ready to start your campaign?